Day in the Life of Michael Tonui

Michael Tonui is a teacher at Bright Hope High School in the Lemolo B community.

He is a Mathematics and Geography teacher although he is also holding the fort by teaching Physics and Agriculture due to a shortage of teachers in his school.

Bright Hope High School serves both the Lemolo A and B communities primarily and then some surrounding areas. 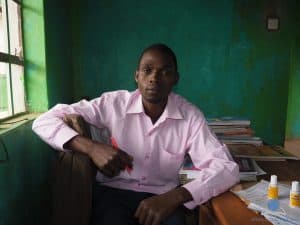 In 2012 while living at home, he started tutoring primary school children in the camp as a way to engage them and help them catch up to the schools near the camps since the move was very disruptive and traumatizing. This is where his passion for teaching was reinvigorated and where he started looking for a way to make it his career. Because of limited opportunities tutoring students, he spent most of the year 2013 working at a tea plantation in Kericho county in the heartland of Kenya’s tea growing area to make money to be able to attend college. This plan was not successful and he decided to come back home in November.

When Kimugul Primary School was starting in December 2013 and January 2014, he was asked by the community to help teach the students as they waited for the school to be constructed and registered. Michael immersed himself in this new school so well that even when public school teachers were deployed he continued to teach at the school and the new headmaster organized for him to join Garissa Teacher Training College in September 2014 after seeing his commitment to teaching.

After completing one year of the two-year training course, tragedy struck and the Teacher Training College and university next door were attacked by terrorists from Somalia in an attack that killed 170 students mainly in the university. Michael and a few others who were in the Teacher Training College managed to escape with their lives and horrifying stories of that fateful morning. Afterwards he decided to stay at home and joined Kimugul Primary School again teaching for a few months.

In September 2015, he took a leap and joined a university in Nakuru county where he felt safe to study for a degree in Education. However, after a semester he could not afford the payments and he dropped out. Fortunately, that’s when Bright Hope High School was starting and he was recruited by the community to teach Mathematics and Geography — the subjects he was taking in college. He has also been the acting deputy principal since the government did not assign a teacher to take that position.
In August 2016, he went back to school enrolling in another university to start over. Fortunately, he was able to study on a part-time basis, taking classes when normal schools were not in session, four months in a year for intensive training and other times learning from home. He is always saving the little he earns to pay for the training and he is now almost done with school. He expects to be through by April next year.

Clearly, Michael is motivated to be a successful teacher despite all the setbacks life has thrown his way. He is dedicated to his passion of shaping the minds of young ones in his community.

Since he lives in Lemolo, about a half an hour’s walk from the school, he starts his day early leaving home between 6 and 6.30 in the morning. He teaches remedial Mathematics classes between 7 and 8 a.m. when the normal school program starts. Throughout the day, he teaches Mathematics in Grades 9 to 11, Agriculture in Grade 10 and Physics in Grade 11. This is a temporary measure until the school finds a Physics teacher to take over.

He is also working on other things like maintaining the discipline of students in his role as deputy principal.

One of the most obvious challenges in this life as a teacher is the morning walk to the school.

Also, while the school administration wants to pay him more, they simply don’t have the resources since they have to source the money from the community. The administration has to walk a tightrope between paying the teachers their worth and keeping education affordable to the students in these villages. Hence, payment only rises when the number of students increases in the school increasing the funds paid into paying all the teachers. He also has to save as much as possible to afford university payments. Hopefully, when he is fully qualified he will be employed by the government and get paid the same wage as other public high school teachers.

The school has been a blessing to him personally because it gave him a chance to afford to further his undergraduate studies. Teaching is his life’s passion and he wants to be thoroughly prepared and qualified for the job (although he is already doing the job).