A Day in the Life of WTA Student, Benedicta

Identifying talent can be an uphill task and often confusing. Some people identify what they love doing by mirroring others. Others establish talent by seeing others do it and believing that they had the capability of doing it better than those before them. Most often, we are unable to know of our capabilities until we try. The moment we establish our talent through hard work, we are able to sharpen our skills and make them more resourceful.

Sixteen-year-old Benedicta Njeri from Springs High School is a student with a great passion for journalism. All parade mornings (Mondays and Fridays), she entertains her peers with her great prowess in reading the weekly news. Her aspirations were driven by some of her former predecessors within the school who had a good command of both the English and Swahili languages while making speeches during school parades. 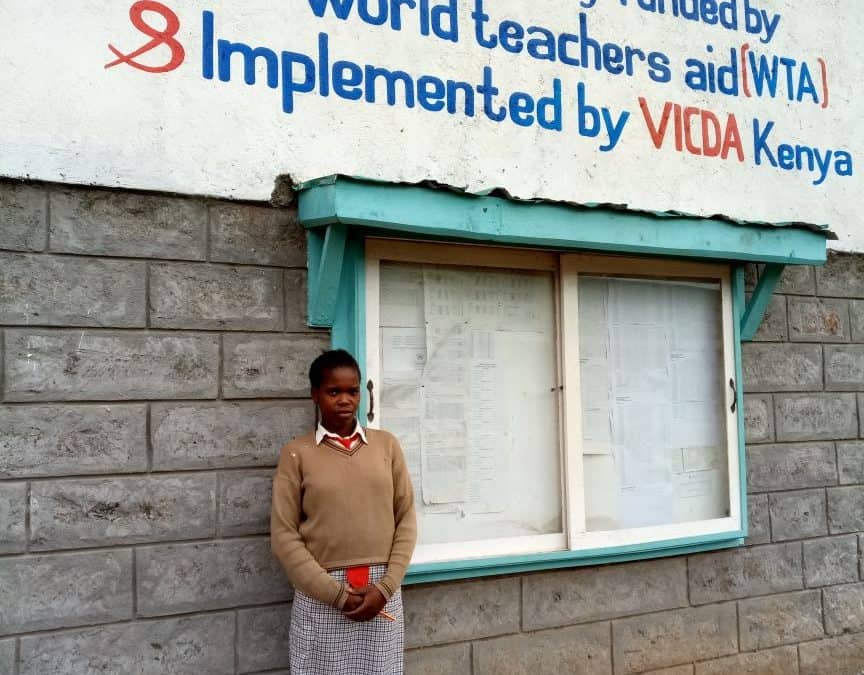 Born into a family of eight siblings, Benedicta admits to being a victim of the past post-election violence in 2007 while living in Burnt Forest. Her family was then displaced and had nowhere to go. They later on moved to Nyahururu before resettling at Salgaa. Unfortunately, in the midst of the quagmire of having to relocate from one place to another, Benedicta lost her father to illness. She acknowledges that upon joining Springs High School she was able to learn so much from other students and also a lot about herself.

When discovering that she had a passion for anchoring she joined the journalism club (also known as the Springs Media). Her schoolmates within the club did not shy away from educating her on how to formulate news before later on presenting it other students on parade days. The news presented is mainly based on the weekly happenings of activities within the school. The school heads would also use the same forum as an opportunity to air out their announcements to the students.

Her skill has not gone unnoticed as most of her teachers often refer to her as a very disciplined and gifted in essay writing. Benedicta noted that she enjoyed history and also mentioned that her history teacher Mrs. Emma was her favorite teacher. She managed to raise the ranks from being a journalism club member to her current position as a sitting chairperson.

Her morning schedule involves waking up at 4 a.m. in the morning. She then goes for her daily routine preps until 5:30 a.m. before preparing and going to school. She then attends her daily classes at Springs High School where she afterwards does her individual preps until 6:30 p.m. Later, she goes back home and assists her mother with house chores and making supper. She later does her assignments before retiring to bed at 10:00 p.m.

Benedicta really admires the current first lady (in Kenya) Margaret Kenyatta mainly for her philanthropic acts in helping out the less privileged persons within the society. She hopes that one day she may be able to help out too and bring change towards her community. The sky is the limit for her and she hopes that one day she’ll get the spotlight to showcase her skills as a renowned worldwide journalist.